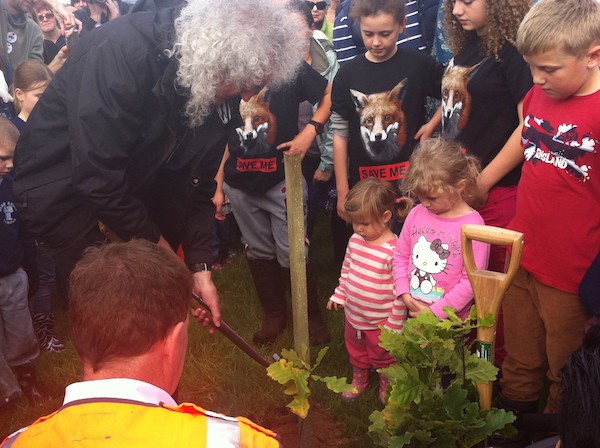 “Mighty oaks from little acorns grow,
Who’ll be reaping what we sow”

Literally put together in less than two hours, the melody for this song came really quick, once I decided on the first note, then the style, which is English/American folk.

I wanted to portray a celebration of native tree planting in an area designated for housing development. The lyrics  needed to explain the positive effects on a community for the future of their children and how nature could play an important part.

It needed a traditional English feel as the area was in the heart of the British countryside, so I stayed with acoustic guitar, double bass and fiddle in 6/8 time. Drums were added to support the large number of vocals (two village choirs) singing the song.

We introduced an electric guitar solo as a nod to the owner of the land – Dr Brian May, from the rock band Queen, who asked for the piece to be performed at the official tree planting day.

The New Woodland Song was awarded a Commended Entry Certificate in the Acoustic/Folk Category in the UK Songwriting Contest 2014.

Listen to the track and see how the trees, shrubs and wildflower meadows have thrived in this youtube video: https://www.youtube.com/watch?v=-Wk41u0CXLE